We’re closing in on the end of school vacation week, and Lilly and I have had a fun time enjoying the great New England weather we’ve been having. I’ve had fun coming up with questions for readers and reading your answers. Thanks for participating!

We spent the week doing some fun things with Lilly-we hiked in the Quabbin Reservoir, played at our neighborhood park quite a bit, and visited Yankee Candle just down the road from us. Lilly loves this amazing candle store that has so much more. She loves to visit the toy store, the candy shoppe, and the Bavarian village (where it “snows” every four minutes with bubbles). This week there was extra fun, as they offered lots of activities for kids. We went bowling and mini-golfing on one day, and had sundaes with Santa and Mrs. Claus on another. Here are a few pictures of our…

I had a conference with Lilly’s first grade teacher last week. Although I knew she was doing fine academically, there were a few things I wanted to check in on.

Although I could see from the papers she brought home from school that her handwriting has improved (she has weakened fine motor skills from SB), I wanted to hear from her teacher that she’s on track in that area. I thought maybe I’d have to get Lilly some Occupational Therapy through school to address her fine motor skills. But no; her teacher delivered a glowing report in all areas, including handwriting.

What I really wanted to know was how Lilly was doing socially. Does she have friends? Of course she does-I’ve heard her talk about them often. But I needed to hear it from the teacher.

Ever since Lilly started preschool at age 3, I’ve worried about this. She was shy at first, though clearly interested in other children. She’d gaze in awe at the other kids who flocked around her in her walker. Not only was she the new kid, but she had a cool blue walker that denoted her as different. At that age, different is good.

Bu the time she started kindergarten, the walker was gone, and though still a little shy, school had helped her to come out of her shell a little bit. Now in first grade, her teacher reports that she’s doing beautifully, interacting with her schoolmates, taking part in classroom activities, and not isolating herself in any way. There’s been no problems with teasing about diapers or braces or any other aspect of her disability.

And why would there be? They’re seven. If only we all loved and accepted each other like seven-year olds. Still, I can’t tell you how relieved I felt at hearing this.

I was a painfully shy child, and I remember the awkwardness it could bring, the feeling that I just didn’t belong anywhere. I was afraid, with her shy tendencies, that Lilly would have the same experiences I did, with the added “burden” of having a disability. I can’t bear the thought of her suffering any kind of social isolation, teasing, or bullying.

But at this point, that’s not happening. Lilly is far more outgoing than I ever was at this age. She’s fine.

I have to remember: Lilly is not me. She’s her own little person with her own personality, and I need to be careful not to project my own fears and neuroses onto her. I need to step back and let her shine. 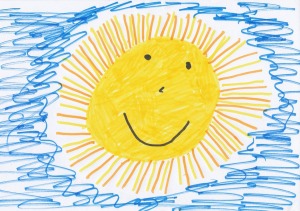